As a publishing act, Migrant Thoughts argues that the image is inevitably nomadic and inexorably migrant and, as Henri Bergson reminds us, is everywhere. Everything is image. We are images among images, and in this respect film is no more than one of the media through which images move. Images become a gesture of resistance, as by being just an image and not a just image, as Jean-Luc Godard said, they are worthy and can never be subdued by power, despotism or an all-too human will corrupted by the idea of ownership. They are pure potential for resistance, as they are not a luxury, or a privilege, and much less a possession. On the contrary, they are the permeable condition of passage so that a living thing does not become stationary or stagnant. The image can of course move on the screen, but at the same time, the image makes a whole screen, a whole surface where it can continue. It continues in bodies, in writing, on these pages, as in politics, archives, memory, literature, and philosophy. The image migrates, and in its wake it provides and proposes intersections, intervals. That is, it advances through life affirming what is living as a cinematographic gesture and, in turn, it exceeds and goes beyond film itself. Or, to put it another way, where cinema itself has to open up to metamorphosis, it becomes a gesture of editing between blocks of text. As editors we have proposed a montage in three parts, with two intervals (opening and closing) as false cuts in a flow of images which could certainly exceed and migrate outside of the fragile content of this book. 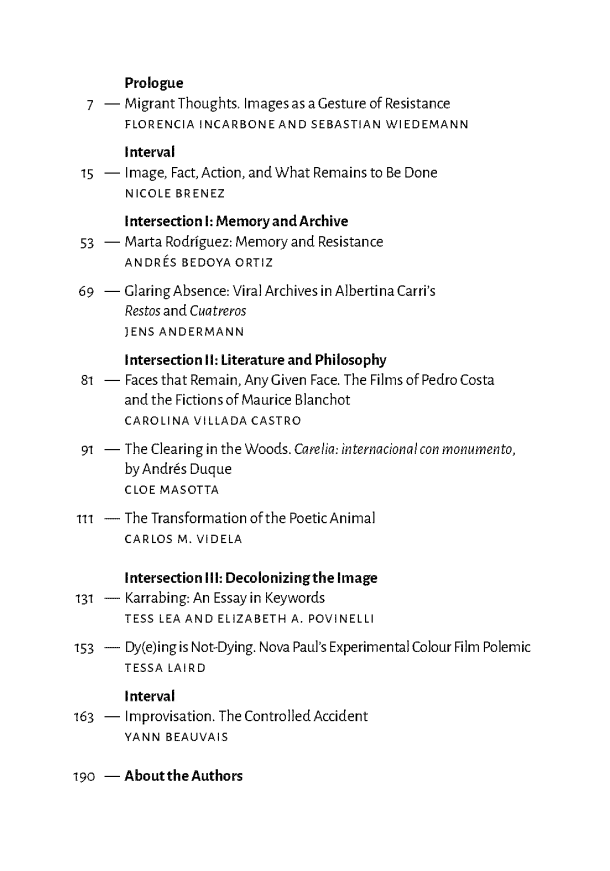