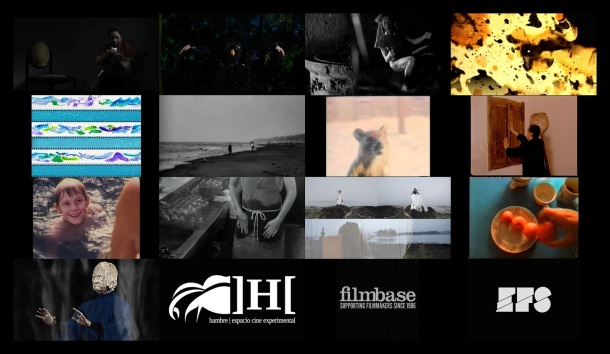 2_Journey To A Land Otherwise Known (2011) By Laura Huertas Millan / Colombia-France / 22mins
“Shot in Lille´s tropical greenhouse, Journey to a Land Otherwise Known is based on the first accounts made in America by European scientists, conquistadors or missionaries. As a pastiche of an ethnographic film, it evokes the moment of the first contact and the survival of the exotic imagery that it engendered.”

3_Being Cat (2014) By Sebastian Wiedemann and Juliette Yu-MIng/ Colombia-Brazil-France-Japan / 19mins
“Sometimes, what is in me is not me. What is it?” Becoming, beings-in-flux, inviting the image to dance somewhere between Butoh and the world.”

Friends of Experimental Film Society
A Day of Experimental Film Screenings @ Filmbase
Experimental Film Society (EFS), in partnership with Filmbase, Dublin, will be presenting a day of contemporary experimental cinema from around the world culminating in the Irish premiere of James Fotopoulos’ feature Dignity (2012).
The work selected for these three programmes is drawn from individuals and collectives that share an affinity with EFS. This affinity might be one of artistic vision, the shared (but varied) belief in a cinema that is personal, free and formally experimental. Or the affinity might be in a similar sense of collectivity, as with the three films proposed by the Latin American experimental film collective Hambre: Casa Circular, Journey To A Land Otherwise Known and Being Cat and the works by Colombian filmmaker Sebastian Wiedemann: Abismo and Waves. The filmmakers might be inspiring figures who have long held a place in our consciousness like Fotopoulos or the Buharov Brothers. Or they might be bright lights that have emerged further along the trail. But in all cases, this work vividly demonstrates the extraordinary richness of possibility that exists in truly alternative cinema today.

This programme is selected by Rouzbeh Rashidi and Maximilian Le Cain. Films from Hambre are curated by Sebastian Wiedemann and Florencia Incarbone. Sincere thanks to all participating artists.